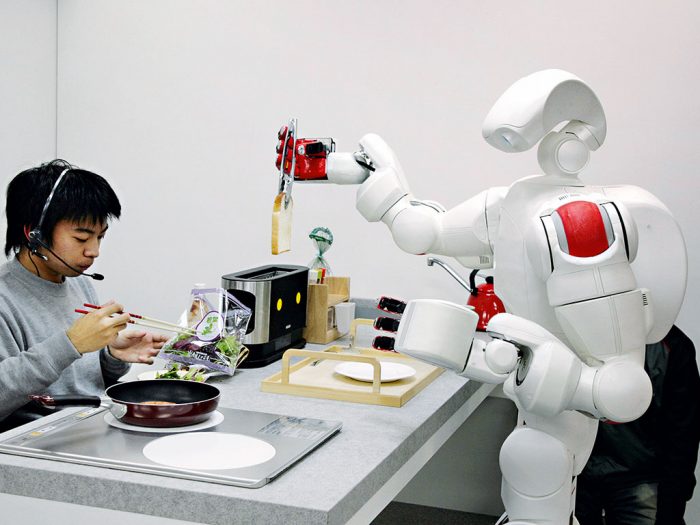 Recently the big American IT company IBM presented a further innovation of their cognitive assistant called “Watson”. Watson ought to be able to check the quality and the material in manufacturing plants in much less time.[1] But “Watson” could do even more. In accordance with the official IBM Website “Watson” can understand all forms of data, interact naturally with people and in addition he can even learn and reason.[2] Especially interacting and drawing conclusions sound interesting. “Watson” may provide personalized recommendations by understanding a user´s personality, tone and emotion. Additionally this cognitive system can create Chatbots, a text-based dialog system. What will the robotically future leads us to? And what could be the consequences?

Capabilities of a robot

One of the important requirements for a successful HRI is the interaction capabilities of the robot.[3] What thoughts and works could a robot do? And how should he do the tasks? The behavior of the robot should resemble the human behavior as much as possible. This includes the verbal conversation as well as the nonverbal feedback and social cues. So-called socially assistive robots (SAR) are already supporting humans in different fields.[4] It is not yet working as a region-wide service system, but SARs are working in the field more and more often. One part is the educational domain. This could be used by companies for the skill enhancement of their employees. But how robots have to be designed for a helpful and effective usage in companies?

Some scientists from the Research Institute for Cognition and Robotics (CoR-Lab) at the Bielefeld University created a scenario to evaluate the effects of an assisting robotic system on users´ task performance.[5]

What activities did the robot? In a first group of participants (Structuring Interaction) the robot guided the test participators as a test coordinator. He also assists by tracking the time and giving generic feedback. Besides he acted as a motivator during the breaks with some positive statements.[6] In a second group (Performance Based Interaction) the interaction was customized to the participant task performance. If the performance was good, the robot gave positive feedback, otherwise the robot provided an individual feedback. Moreover the robot inquired several times if the participant understood the test procedure.

The test achieved great results. The participants in the performance based group had significantly better test scores than the comparison group.[7] These results confirm that robots can have an impact on the user´s task performance and also that users can benefit from a SAR. Moreover, the participants of the performance based group rated that they want to use humanoid robots for difficult tasks more often than users in the comparison group.[8]

Another team of scientists at the Carnegie Mellon University in Pittsburgh made a research in a related field. They designed a robot that interacts with people in a natural, multi-modal way.[9] The robot uses speech and gesture. Thereby he is able to track people, process speech and understand language. In the test situation the robot has to work as a receptionist. In almost 75 % of the time he interacts successfully with the humans. (As long as the people were familiar with the capabilities of the robots) It they were not prepared for the interaction with the robot, every second interaction was unsuccessful. That result illustrates the importance of the capabilities of a robot.

It is not certain if the measured effects are temporary or ongoing.[10] However, it´s obviously important for a successful interaction that the robot knows as much as possible about the human. He ought to be authentic and give true feedback. On the other hand people have to know more about the capabilities of the robot. What´s the best way to achieve these goals?

It seems that robots have to be like humans, at least particularly. For example in die domain of feelings. But feelings are crucial, because people´s emotions are very different. Some scientists from the Department of Applied Robot Technology in Korea examined android robot systems regarding the theories of basic emotions.[11] With the aid of questionnaire data the basic emotions should be analyzed by the robot. Based on that study works three other researchers went deeper into the world of emotions. Luisa Damiano from the University of Bergamo (Italy), Paul Dumouchel from the Ritsumeikan University in Kyoto (Japan) and Hagen Lehmann from the University of Herfordshire (United Kingdom) discussed if robots need “interiority” for a better communication with humans.[12]

Interiority means the inner world of an individual. In fact, robots could only simulate emotions and empathies; the obvious displayed affective relationships wouldn’t be real. A machine, consisting of a binary code, could only do what a computer scientist programmed. Feelings are not true. At least until now. This is one of the most explored topics by the development of robots. Due to the status of objects, a robot isn´t able to be an effective social partner for humans, is it?[13]

Wouldn´t it be a crazy idea, if robots have interiority? If they´d have real emotions. Sounds like science fiction. And various scientists have different views about the possibility of real feeling robots. So first, it´s important to explain the thesis of the intra-individual genesis of emotions. Following the idea of interiority, there must be a dualism of the inside and the outside. The external domain could be observed, the internal domain is like a black box, which is really complicated to research. But it´s not impossible. The affective expression is continuous. And there´s a continuous affective exchange between the inside and the outside of humans. But emotions are not only internal, they are also part of the behavior of any human.[14] And this behavior has to be decoded by robots. Robots ought to understand human feelings and interact authentic and emphatic. But they must not be a copy of humans. Robots shouldn´t be created like humans, they will have to build their own affective world by using historical data, explains Professor Klaus-Robert Müller from the TU Berlin.[15]

So it seems that the most important step is to create an embodied mechanism, which allows robots to learn their own affective coordinate.[16] Thereby they have to get the possibility of initiative and unexpectedness. This is what contemporary robots haven´t got yet. Therefore it ought to be the goal to create humanoid robots with excellent capabilities of coordination besides a maximum level of autonomics.[17]

Effects by robots to employees

How will the automation change our working world? One possible way looks like this: Well-paid consultants will come into the companies to build perfect systems of automation based on robotics.[18] The software programs, which are cloud-based, make more and more operations while permanently picked-up pace. And the robots have impacts on almost every job. Especially the jobs with less skills requirements[19] and jobs where people are sitting in front of computers and are working with information and knowledge are concerned.[20] Parts of this evolution are already in working process. The next step could be genetic coding. This means that algorithms are going to develop themselves based on Darwin´s theory of evolution.[21]

In the picture you can see a possible way of robotics introduction in a big German electricity company. According to some researchers from the Martin School of Oxford University it´s possible that up to 50 percent of the Jobs in the United States could be omitted due to automation.[22] The benefits of using robots are obvious. It is more efficient and flexible, it´s faster, make less mistakes and it can work 24 hours every day.

Well, the loss of every second job shows the worst case. The digital revolution is not the first revolution during the last two centuries. But we shouldn´t treat the digital revolution including the robotics as an irrelevant topic. Employees can react and struggle against losing their work. The big buzzwords are education and collaboration.[23] The two scientists Erik Brynjolfsson and Andrew McAfee from the MIT explain that it will be one of the most important advices to collaborate with the robots and not to work against them.[24] 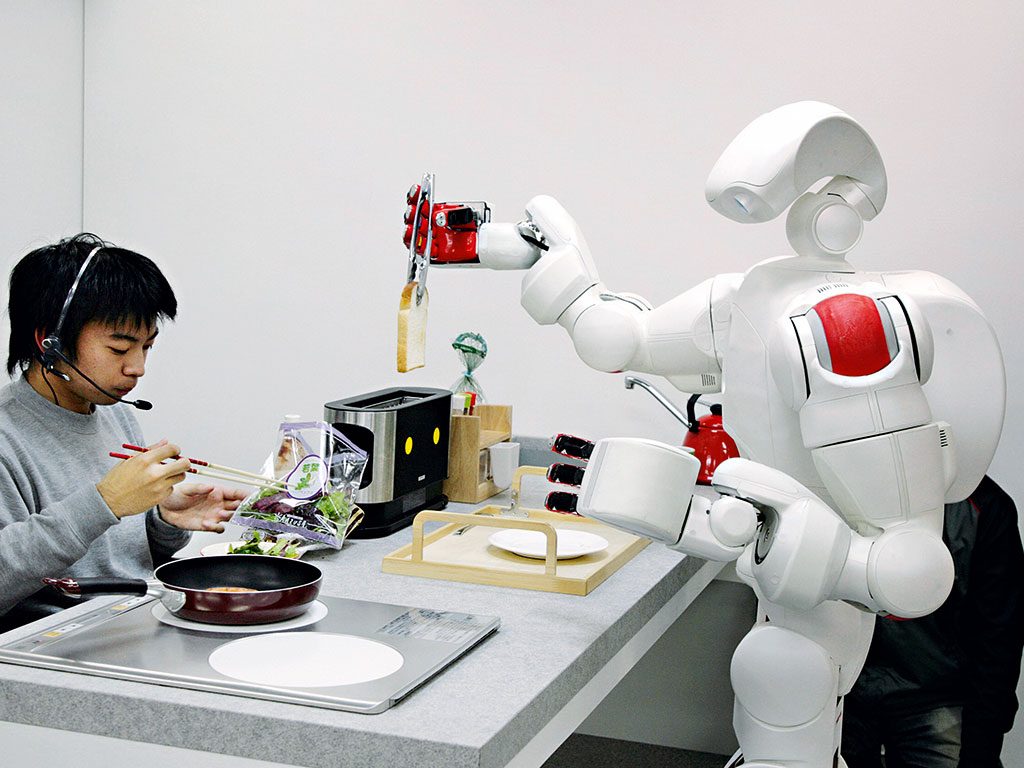 alk through the streets of Berlin or will serve you the dinner in your restaurant? This depends on several factors. If we believe Moore’s law it´s only a matter of short time because the computing power redoubles every 12-24 months.[25] This is an essential basis for the digital revolution. A good indicator for robotically future trends is Japan, one of the leading states by developing android robot systems. If you are interested in the upcoming technical future or if you want to get your next meal served by a robot, move to Japan and have a look into our fascinating future.

[11] Difference of Efficiency in Human-Robot Interaction According to Condition of Experimental Environment, Springer-Verlag (2012) page 220